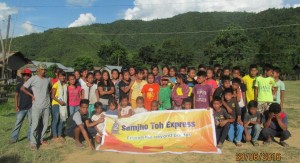 Being part of the Samjho Toh Express journey is a privilege but not without challenges. It involves the guts to break stereotypes. While enjoying the bliss of the maiden journey the demand to drive BMW becomes pressingly high which is nothing but a call to live life Beyond My World. It is very challenging at the same time adventurous. One needs to be daring and muster the courage to do it.

Driving BMW (Beyond My World) is nothing but the idea of visiting community other than a community one belongs and integrated oneself with them by learning their culture and perform their cultural dance in the Manzil event pays a huge dividend. As cultural dance performance required more than one person they formed a group and visited the house of other community in group and have interaction trying to extract maximum knowledge of the practices, belief and culture of the community.

A group of young people who belong to Kuki community decided to perform the cultural dance of Nepali community. Nepalese are minority community and they are look down upon to such extent that when a Nepali show up somewhere people make fun by saying ‘I thought it human being and unfortunately it’s Nepali’. The task required them to personally visit the community – learn the song, dance steps, the costumes and the meaning of the song and what the dance depict about.

They visited them and helped them in their work of peeling off the maize and cut light joke. They also learned their language apart from their cultural dance. They also shared the idea of getting married to one another. One Nepali mother was so happy with such unusual initiative of the young people that she promise the boys that she will find beautiful Nepali girls for them then the girls in the group complained by saying what about a Nepali handsome boys for us……………… so the light moment of joy transpire into better understanding and acceptance.

Similar story happen in another group who decided to perform Kom cultural dance – a minority community like Nepali. They also do the same like the first group and learned about the community culture, tradition and their language.

“My perception about Nepali community is totally change from this experiential journey and I now look at them with love as my own community. They are such humble people and peace loving. I now realized the blunder I committed by considering them as lesser human being. Now I will spread the message of love and equality of all irrespective of which community one belongs”. Mr. Seiminlun Dimngel

On the challenge and call to break gender stereotyping……………

The Samjho Toh Express Journey not only brings about better understanding among communities by respecting their differences and accepting their similarities, it also brought about breakthrough in gender stereotyping. Many boys took pledge to start cooking, washing and other household chores.

“I will start helping my sister and my mother in every ways”. Mr. Prabhunath

“from now on, though I am a boy I will help my parents and my sister in domestic works”. Mr. Paolenlal Kipgen

“I will do away the mentality of boys being superior to girls. I will always respect them and help them even cooking, washing, moping etc. I will not segregate from now work on gender line” Mr. Janggin

“Respect others, so that you will be respected” Mr. Minthang Kilong

“Being human is enough to love one another. Languages, religions and tribes are for our identity not for discrimination and hate”. Mr. Ankit Das

“Abolish stereotype and make friends with different communities by sharing the feeling of love for we are all one”. Kennedy Kuki

“No stereotype in friendship making. From now one let’s love each other and build oneness through friendship”. Teresa Kom

“Will strengthen my friendship with other communities and from now on will help my parents and sisters in domestic work”. Ginkhomang Haokip

“We should not make any difference based on religion and make friends with anyone” Mr. William Kipgen

“I will make a good bonding between me and my friends”. Miss Kimnunmoi Haokip
“Let’s break differences in religions, come let’s join our hands together and make friendship” Miss Kimneichong Khongsai

“The more friendship with other communities the less conflict. So let’s keep making friends with each other” Miss Prema